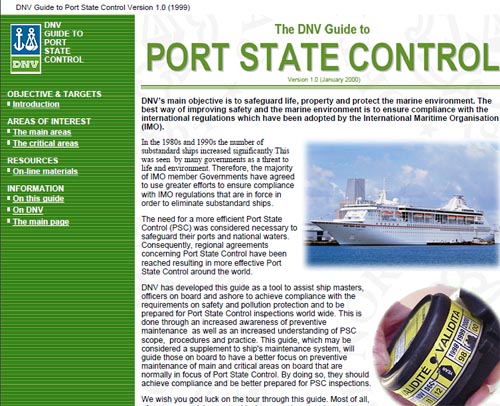 DNV’s main objective is to safeguard life, property and protect the marine environment. The
best way of improving safety and the marine environment is to ensure compliance with the
international regulations which have been adopted by the International Maritime Organisation
(IMO).
In the 1980s and 1990s the number of
substandard ships increased significantly This
was seen by many governments as a threat to
life and environment. Therefore, the majority
of IMO member Governments have agreed
to use greater efforts to ensure compliance
with IMO regulations that are in force in
order to eliminate substandard ships.
The need for a more efficient Port State
Control (PSC) was considered necessary to
safeguard their ports and national waters.
Consequently, regional agreements
concerning Port State Control have been
reached resulting in more effective Port
State Control around the world.
DNV has developed this guide as a tool to assist ship masters,
officers on board and ashore to achieve compliance with the
requirements on safety and pollution protection and to be
prepared for Port State Control inspections world wide. This is
done through an increased awareness of preventive
maintenance as well as an increased understanding of PSC
scope, procedures and practice. This guide, which may be
considered a supplement to ship’s maintenance system, will
guide those on board to have a better focus on preventive
maintenance of main and critical areas on board that are
normally in focus of Port State Control. By doing so, they should
achieve compliance and be better prepared for PSC inspections.
We wish you god luck on the tour through this guide. Most of all,
of course, we wish you good luck on your journey at sea.
DNV, January 2000.
DNV Guide to Port State Control Version 1.0 (1999)